Part of Jacky Lorenzetti’s ambitious plans for Racing include the building of a brand new stadium in Paris. However, construction work on the 40,000-seater Arena 92 has been continually delayed due to protests and funding issues. It now looks like work will start early in 2014, with the aim of being complete in late 2016. Racing’s current home is the 14,000-capacity Stade Olympique Yves-du-Manoir, known simply as Colombes to local supporters.

While there’s lots of history at Colombes, it is not the most attractive of stadiums, with the running track around the pitch an unwelcome feature. Lorenzetti likes to relocate some of les ciels et blancs home games, their first fixture of this Top 14 season being a prime example. With many Parisians still on holiday in mid-August, the home tie against Brive will be played in La Rochelle. Additionally, Racing’s H Cup fixture against Harlequins in round three will take place in Nantes’ Stade de la Beaujoire. 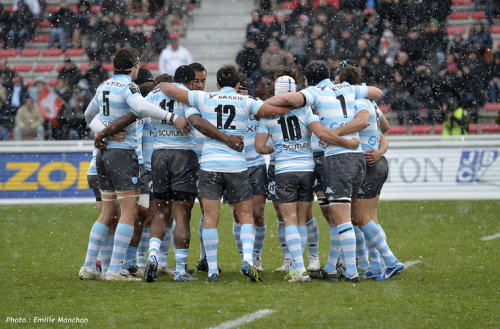 A nine-game winning streak in the second half of the season helped Racing to sixth place in the Top 14 regular season table, before they lost to Toulouse in the play-offs. (c) Emilie Manchon.

Under Gonzalo Quesada les Racingmen had a rocky start to last season, before finishing strongly in sixth to qualify for the barrages phase of the play-offs. The return of outhalf Jonathan Wisniewski at the turn of the year launched Racing on a nine-game winning streak. In the play-off game Racing never truly looked like beating Toulouse, losing 33-19. The Parisians had trouble scoring tries all season, with their total of 32 the third-lowest in the league. The sheer firepower they have brought on board should be enough to remedy that.

Realistically, making assumptions about Racing based on last season would be foolish with so many new players involved, as well as the new coaching team.

Trophies, trophies, trophies. After six years of building the club into Top 14 mainstays under Pierre Berbizier and Quesada, it is time for Racing to start competing for silverware. The Parisians’ budget is now in line with the likes of Toulon and Clermont in the region of €27 million, allowing them to recruit spectacularly this summer. Lorenzetti understands that les deux Laurents need time to combine the ingredients into a championship-winning side, but he will also expect the club to compete in the Top 14 and Heineken Cup this season. 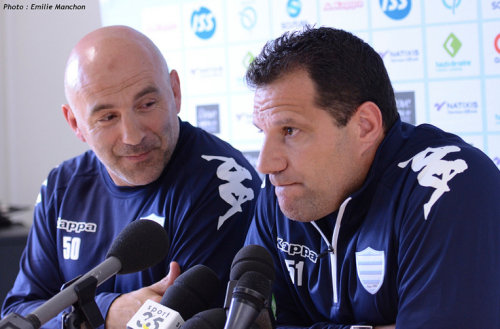 Travers (left) and Labit have not encountered anything approaching failure in their shared coaching career so far. (c) Emilie Manchon.

Laurent Travers was a hooker with Brive when they won the Heineken Cup in 1997, while Laurent Labit was a fullback for Castres’ championship-winning side in 1993. The pair first came together at Montauban in 2004, leading the club from the Pro D2 to H Cup qualification in just four seasons. Castres signed them in 2009 after finishing in 12th the season before. Toto and Lolo‘s impact was superb as they made the play-offs in each of the fours years since, culminating in their shock Top 14 win last season.

The two Laurents have a reputation as being technically excellent and working closely with their players on specific rugby skills rather than simply selecting and motivating the team. Labit and Travers feel they work better as a duo as it allows them to interact with more of the squad on a day-to-day basis, while also giving the players two channels to communicate through. The new Racing coaches are very focused on the power of a strong group, which should work well with such a large number of new players. 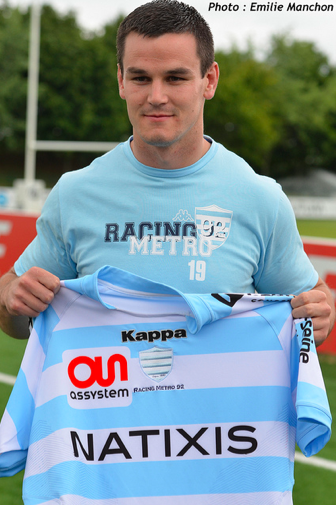 Racing have 15 new players in their squad this season, which is well balanced by the departure of 20. Jonny Sexton is obviously the star signing, but fellow Lions Jamie Roberts and Dan Lydiate aren’t far behind. Northampton’s propping duo of Brian Mujati and Sione Tonga’uiha are also part of the influx and may be the most important additions of all in a league where the scrum has a near-religious importance. Springbok second-row Juandré Kruger makes up the group of truly high-profile newcomers.

Beyond that, Racing have a new trio of French internationals in Adrien Planté, Marc Andreu and Wenceslas Lauret. Planté won his first two caps in June at the age of 28 after a slow-burning career on the wing for USAP. Andreu may not be the biggest winger, but his low centre of gravity and footwork make him a real try-scoring threat. He was part of Castres’ Top 14 success last season and has scored two tries in six French caps. Lauret joins from Biarritz, where the flanker had lost momentum after winning three international caps.

The remaining six new faces include back-up players like Georgian loosehead prop Davit Khinchagishvili from Brive and fullback Benjamin Lapeyre from Toulon, as well as some youthful promise in scrumhalf Laurent Magnaval. 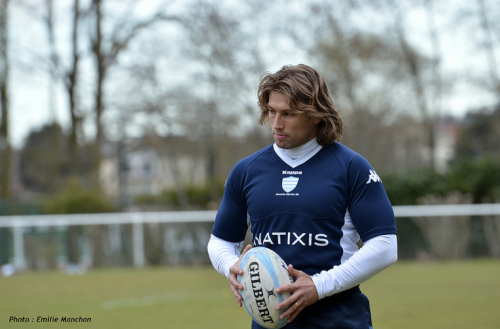 Dimitri Szarzewski is Racing’s captain despite only having joined at the start of last season from neighbours Stade Français. The 30-year-old hooker took over the leadership from Jacques Cronjé during the campaign after impressing with his work-rate and magnificent hair. At fullback, Juan Martín Hernández (31) is not the athlete he once was but ‘El Mago’ still has the vision and creativity that gave him that nickname. He will certainly look forward to playing outside the excellent passing of Sexton.

Scrumhalf Maxime Machenaud had a poor tour for France in New Zealand this summer, but remains important to Racing. The 24-year-old is surprisingly powerful for his size and at his best provides unfussy service to his outhalf. Perhaps the most impressive thing about les ciels et blancs‘ squad this season is its depth, giving the two Laurents the possibility to rotate their team and choose different players for varying tactical approaches.

Fijian no. 8 Sakiusa Matadigo is an intelligent player, whereas ex-captain Cronjé is all brawn. In midfield, Jamie Roberts’ explosiveness can be combined with the defensive leadership of Fabrice Estabenez or the energy of Henry Chavancy. Out wide, Andreu and Planté must compete with the magic feet of Juan Imhoff, the power of Benjamin Fall and the flair of Virimi Vakatawa. Behind Mujati and Tonga’uiha in the propping depth charts are French internationals Eddy Ben Arous and Luc Ducalcon, the experienced Khinchagishvili and one-time Munster man Julian Brugnaut.

The two lads have this one well under control. Allez Racing! (c) Emilie Manchon.

Sexton is the star attraction at Racing, and he looks made for the challenge. While it is true that French clubs approach play-off games conservatively, the regular season games are generally quite open. That will suit the Irish outhalf, who has so many talented players around him to conduct. As with any high-profile foreign player in France, the expectations on Sexton will be hugely demanding but the 28-year-old’s mental strength will allow him to overcome any teething problems.

Ronan O’Gara appears to be settling into his first coaching job with ease. His primary role is to work on kicking with Racing’s first team, but it is likely that he will also aid Labit in organising the backline. Kicking from hand is one of the weakest skills in the French game currently and O’Gara’s work in Paris will be closely followed by the other Top 14 clubs. For both Irishmen, an exciting and challenging season lies ahead.

The excellent photos used with this article are all the copyrighted work of Emilie Manchon. You can see more of her photos of Racing on her Flickr page.