This week’s IRUPA Player and Young Player of the Season shortlists unsurprisingly failed to include a Connacht player. Ronan Loughney was included on the Medal for Excellence shortlist alongside Shane Jennings and Mick O’Driscoll. That award is basically the ‘Unsung Hero’ prize. Check out the full shortlists for all the awards here.

Surely the lists in the main competitions could have been extended to four to include a player from Connacht, seeing as every other province is represented? Mike McCarthy, Brett Wilkinson, Gavin Duffy and Loughney have been ever-present and instrumental in all of the big Connacht performances this season. In the Young Player category, Tiernan O’Halloran’s superb season deserves mention.

Anyway, Eric Elwood and his squad will be unconcerned ahead of a weekend where they can earn a 3rd consecutive win in the PRO12 . They host Aironi in the Sportsground tomorrow evening (17.00 KO). If they win, it will be their second best run of form since this competition took on the current league format back in 2003/04. That season, Connacht won 4 games on the trot (Borders, Glasgow, Llanelli and Borders again, for the record). Since then, the best they have managed in the league is two wins in a row.

It’s been a rough ride for Connacht rugby since the Celtic/Magners/PRO12  league’s inception. They have finished in the bottom two positions for seven consecutive seasons. That 4-game run in ’03/04 helped them to 9th of 12 teams, their best-ever final standing since the competition became one league. In the two seasons prior to ’03/04, the tournament was split into two pools of 8, with the top 4 teams in each pool entering the quarter-finals.

Connacht rugby has always been overshadowed by its provincial rivals. (c) Eoin Gardiner.

Both those seasons were particularly successful for Connacht as they reached the quarter-finals in consecutive campaigns, losing to Glasgow in ’01/02 and Munster in ’02/03. In that ’02/03 season, Connacht even had a 5-game winning run (Borders, Cardiff, Leinster, Newport and Bridgend that time). Those seem like relative glory days compared with what the western province’s fans have been watching since. However, as I have mentioned before and truly believe, the signs from Connacht this season have been positive.

Tomorrow’s game at home to Aironi is one that Elwood’s men simply have to be winning if they are to continue moving forward. They are a better team than Aironi and their performance needs to show the confidence that has been building in the second half of this season, highlighted by wins over Harlequins and Ulster. If Connacht can manage to win both of their remaining fixtures (the final one is away to the Warriors) then they have a strong chance of a best-ever 8th-placed finish.

If that is achieved, coupled with a first Heineken Cup win in their debut season, this campaign will have represented superb progress for the province. Elwood has managed to blood some exciting young talent this season in the likes of Eoin Griffin, Dave McSharry, O’Halloran and Denis Buckley. Ireland U20s’ fullback Shane Layden will hope to join those ranks next season. The signings of Nathan White, Dan Parks and Willie Faloon will certainly add quality to Elwood’s squad too.

The hope for Irish rugby is that either Ulster or Leinster wins the Heineken Cup, thereby ensuring qualification for Connacht again. Elwood would be better prepared to balance his squad at the second time of asking. This season, Connacht were often stretched, playing largely the same team from week to week. That effected their PRO12 form, manifested in the inability to see out games from winning positions.

Another positive is that Connacht will field an ‘A’ team in the British and Irish Cup for the first time next season. That means decent exposure for more of the province’s Academy and underage players. Furthermore, Connacht are exempt from the IRFU’s succession strategy, which will soon limit the number of Non-Irish Qualified players at the other three provinces. Elwood and his management team will have few restrictions as they aim to bring Connacht rugby to a new level in the coming years.

But let’s not get ahead of ourselves. Small steps at a time, inch by inch; that’s the way. It all starts with securing a 3rd consecutive PRO12 win tomorrow in Galway. That would represent clear, statistical progress. Do that and focus will turn to the Warriors, where a win could mean a best-ever finish. It’s impossible to say for certain where Connacht will go from there, but I’m optimistic. 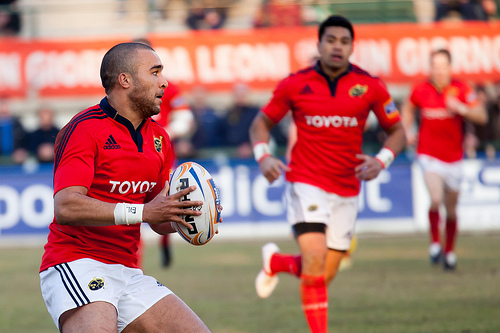 The revelation that Tony McGahan will leave the province at the end of the season has dominated Munster news this week. However, that will have to be pushed aside tonight as they look to continue their 4-game winning streak. 3 of those wins have brought try-scoring bonus points, but the Blues, 5th in the league, represent a tougher challenge.

McGahan has made five changes to his starting 15. Ronan O’Gara, Donnacha Ryan and Peter O’Mahony, all starters against Treviso last weekend, are on the Irish bench tomorrow. Denis Hurley has also been called up as cover in the event of any late injuries. For Munster, Marcus Horan starts at loosehead ahead of Wian du Preez, while Ian Keatley, Tommy O’Donnell and Billy Holland slot in for the internationals with Felix Jones getting his first start of the season at fullback.

Blues’ boss Justin Burnell has made three changes to his side. Richie Rees replaces Welsh squad member Lloyd Williams at scrumhalf, Chris Czekaj comes in at fullback for Ben Blair while Maama Molitika starts at No.8 with Xavier Rush out ill. Munster fans will be denied an early look at recently announced signing Casey Laulala, sidelined with a hamstring injury.

Munster are 3rd in the table coming into this weekend, 4 points behind the Ospreys, with a game in hand. A Munster win, coupled with a favour from Ulster in Ravenhill, would see McGahan’s men into that home play-off position. Verdict: Munster by 5.

Ulster’s recent good form was brought to an abrupt halt by the Blues last weekend, as the Cardiff side came out 21-14 winners. Brian McLaughlin knows that a win tonight is vital if Ulster, in 6th, are to keep their play-off hopes alive. While the Ospreys have only lost three times in the PRO12 season, they are missing a total of 16 squad players due to international call-ups.

McLaughlin has finally made the call that many, including The Touchline, have been calling for in recent months. David Humphreys has been dropped to the bench, with Paul Marshall coming into the side. That results in Ruan Pienaar moving to outhalf. Pedrie Wannenburg’s return from a foot injury means that Robbie Diack (3 tries in 4) is unlucky to miss out. The only other changes are in the front-row, with Paddy McAllister taking over from Callum Black at loosehead and Andy Kyriacou being restored at hooker in place of Nigel Brady.

As mentioned, the Ospreys are missing a host of internationals, as well as having 7 players out injured. They can still name the likes of Welsh internationals Duncan Jones, Ian Gough, Dan Biggar and Andrew Bishop in their starting line-up. The talented young trio of Rhys Webb, Matthew Morgan and Ashley Beck have curiously been left on the bench, so expect an impact from them at some stage.

There will be no better chance for Ulster to beat a team above them in the PRO12. While the Ospreys are severely depleted, Ulster’s selection is basically first-choice bar Stephen Ferris, Andrew Trimble and Rory Best.                            Verdict: Ulster by 7.

Connacht vs. Edinburgh @ The Sportsground

Connacht are looking for their 5th win of the season. (c) Pierre-Selim.

Connacht managed to end a 10-game losing run in the PRO12 against the Warriors last weekend thanks to a last-gasp Niall O’Connor penalty that drew the score level at 13-13. As seems to be the way with Connacht, it could have been so much more. Tonight they take on an Edinburgh side who sit 9th in the league and are coming off a disappointing loss to the Dragons. Prime opportunity for Connacht to secure a rare win.

Eric Elwood has given Academy prop Denis Buckley his first start for the province with Brett Wilkinson away covering for the international squad. The only other change to the side sees scrumhalf Frank Murphy return after recovering from a groin injury. Dave Moore is unfortunate to drop out of the match day squad after some promising cameos in recent weeks.

Michael Bradley makes four changes to his Edinburgh side after that loss ot the Dragons. Chris Paterson comes in at fullback, Jim Thompson is selected at 13, while 20-year-old Gregor Hunter should add some flair at outhalf. Up front, Scotland A international Andrew Kelly starts at hooker. The prolific Tim Visser is on the left wing, and Connacht will need to cut him down early.

It’s not the most intimidating Edinburgh selection, and this is a game that Connacht will most likely have been targeting for a home win. Whether or not they start finishing the chances they have been creating will be the deciding factor. Verdict: Edinburgh by 3.

Last weekend's win over the Scarlets was Leinster's 12th in a row. (c) Ken Bohane.

Fergus McFadden’s complete individual performance helped Leinster to a narrow 16-13 win over the Scarlets last weekend. That win saw them maintain a 10 point lead at the top of the PRO12. The Warriors were denied a victory in Galway as Niall O’Connor kicked Connacht level with the last action of the game. The Warriors remained 4th after the draw, but will be feeling the pressure of Ulster, the Blues and the Scarlets breathing down their necks this weekend.

Joe Schmidt has made several changes to the team which scrapped past the Scarlets. Young centres Collie O’Shea and Brendan Macken return, hoping to continue the promise they showed two weeks ago against Treviso. At scrumhalf, Isaac Boss comes in with Eoin Reddan on Ireland duty. In the front-row, Richardt Strauss is joined by Heinke Van der Merwe and Connacht-bound Nathan White. Mark Flanagan gets his 2nd start of the season in the second-row, while Dominic Ryan is at blindside. There’s plenty of youth on the Leinster bench, including promising 20-year-old wing Andrew Conway.

The Warriors show four changes to the side which drew in Galway. Alex Dunbar comes into midfield with Graeme Morrison selected for Scotland. Sevens specialist Colin Shaw is on the left wing in place of ex-Ulster man Tommy Seymour. In the pack, Mike Cusack is chosen at tighthead, with Scottish Rugby Elite Development player Nick Campbell starting in the second-row. Ruaridh Jackson will run things from outhalf.

Leinster were far from their sharpest last weekend, and with the Warriors under pressure in the last of the play-off spots, this is a big test for Schmidt’s side. Incredibly, they haven’t lost in any competition since the 17th of September 2011, an 18-game unbeaten streak. That loss was at the RDS against the Warriors, with fairly similar line-ups. Crucially, the likes of Ian Madigan, Leo Auva’a and Dave Kearney have grown as players since then. Verdict: Warriors by 2.