While his debut for Racing Metro was not a flawless affair, there were enough positives in what Jonny Sexton did to offer encouragement for the season ahead. The 28-year-old was as sharp as ever in attack but will be disappointed with his place-kicking and one defensive error. Racing finished 19-14 winners in their relocated home fixture at the Stade Marcel Deflandre in La Rochelle.

In a Racing side that is clearly still in the process of getting accustomed to playing together, Sexton was excellent in possession. The Lions outhalf took the ball to the line as threateningly as usual, asking questions of the Brive defence before passing to forward runners inside and outside. He also carried the ball himself on occasion and looked strong in contact. Sexton’s habit of running with the pill in two hands at all times was unsettling for Brive’s defence, who were unsure which option the Irish man was going to take.

Jamie Roberts is still rehabilitating the hamstring injury he picked up while playing for the Lions this summer, but the sooner he is back the better for Sexton. While Fabrice Estebanez and Henry Chavancy are both good centres, they are not yet comfortable with Sexton. At times against Brive, the outhalf was screaming out for a centre to come steaming down outside him on a direct line. Estebanez and Chavancy will begin to recognise the cues in Sexton’s attacking body language with more regularity as they play together more often, but Roberts would definitely help at this early stage. 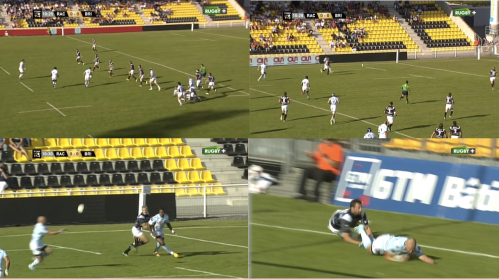 Click the pic to enlarge. Top left) Sexton lines up the kick in behind Namy. Top right) the ball bounces but the back spin takes it over Vakatawa. Bottom left) Lepeyre follows up to claim possession. Bottom right) And scores under the posts.

Racing enjoyed the better of the opening exchanges, with scrumhalf Maxime Machenaud’s powerful sniping making particular gains. From one such scurry the Parisians got onto the front foot and a phase later, Sexton took a smart linking pass from flanker Antoine Battut. Faced by a Brive defence rushing up, Sexton stroked a perfectly weighted diagonal kick out to the left, in behind Guillaume Namy. Racing wing Virimi Vakatawa had read the play but a high bounce of the ball went over his head. However, fullback Benjamin Lepeyre had followed up and he gathered to score.

That impressive contribution was part of a superb kicking game from Sexton. Clearing out of Racing’s 22, the outhalf managed to get thumping distance on his touch-finders, admittedly aided by a breeze. Sexton’s contact with the ball was superb and it was encouraging to see him striking spirals with such confidence.

In defence, Sexton was solid, although he did make an error for Brive’s try. After Racing had been split up the middle, they managed to scramble and get themselves into a decent defensive position in their own 22. When Brive moved the ball wide to the left, Sexton, the last defender, shot out of the line but failed to take man and ball. That allowed lock Julien Ledevedec to get in behind Sexton and give the scoring pass to winger Elia Radikedike. While it was not an ideal defensive position to be in, Sexton could have done better.

Click to enlarge. Top left) Brive move the ball out to the left and Sexton shoots up. Top right) Sexton buys Ledevedec’s dummy and doesn’t go for the hit. Bottom left) Ledevedec gets in behind Sexton and draws Szarzewski. Bottom right) The lock passes for Radikedike to run in unopposed.

Saturday wasn’t Sexton’s best day from the tee. Three from six won’t have been satisfactory for the outhalf, who demands so much of himself. The three missed kicks were certainly within his usual capabilities. After converting Lepeyre’s try from under the posts and then scoring from a penalty in a similar position, Sexton missed two penalties before half time. The first was from 45 metres out but directly in front of the uprights, while the second was 10 metres closer but at a similar angle.

In the 50th minute, Sexton converted an easy effort from underneath the sticks but two minutes later missed with a 40 metre effort, once again from a central position. That was the Irishman’s last major contribution to the game as he was replaced by Jonathan Wisniewski five minutes later. Racing’s reliable French outhalf kicked two penalties from two to close out the win for Racing in what was a poor spectacle overall.

There were many encouraging aspects to Jonny Sexton’s first game in a Racing shirt, but he will need to take every single point on offer against Toulon on Friday night.

Club Athlétique de Brive was created in 1912 but had to wait until 1957 for its first national title, when they won the French Second Division. In 1965, led by a backline nicknamed l’attaque ricochet (which included Pierre Villepreux), Brive reached their maiden First Division final but were beaten by Agen. The Limousin-based club lost finals again in 1972 and 1975, as well as later in 1996. Brive did manage to claim a trophy in ’96, winning the Challenge Yves du Manoir.

In 1997, CAB won the second-ever Heineken Cup by beating Leicester, before dramatically losing to Bath (worth a watch) in the following year’s final. That was the end of the glory days, with Brive relegated from the Top 16 in 2001. By 2003, they were back in the top-flight where they established themselves as mid-table regulars and Challenge Cup hopefuls for the remainder of the decade. In 2005, the club altered its name to the current CA Brive Corrèze Limousin. At the end of the 2011/12 season, they found themselves once again relegated to the Pro D2.

Brive-la-Gaillarde is situated in the Corrèze département, within the Limousin région. The Limousin is a largely rural area in south-central France. Clermont is the derby game in terms of proximity. Brive itself has a population of around 50,000. The club play their rugby at the 15,000 capacity Amédée-Domenech, named after Brive’s legendary prop. Domenech helped the club to their 1957 Second Division glory and won 52 caps for France. After retiring, he became a politician and was even part of French Prime Minister Edgar Fauré’s cabinet.

Brive finished second in the regular season Pro D2 table, meaning they had to negotiate the play-offs in order to secure promotion. That challenge posed no major problems as les Brivistes overcame Aurillac in the semi-final, and comfortably beat Pau in the final. Having been relegated from the Top 14 in 2011/12, Brive had worked hard to retain as much experience in the playing staff as possible, and the scheme worked.

On top of that effort, the recruitment of international players like Mike Blair, Georgian prop Goderzi Shvelidze, and Fijian Dominiko Waqaniburotu added quality to the squad. Despite an attack which was only the eighth-strongest, Brive’s excellent defence (2nd-best) and a superb run of form in the second half of the season helped them to bounce straight back up.

Brive feel that their natural home is amongst the elite clubs in France. While some figures involved with the club have spoken about a top 10 finish this season, the realistic aim for Brive is staying up, le maintien. Having lost several key players, Brive will need their direct replacements to integrate rapidly. Head coach Nicolas Godignon will hope to carry the form from the tail-end of last season into this one. The fear for les Brivistes is becoming a club who bounce between the Top 14 and Pro D2 each season.

Brive did well to bounce straight back up last season. Staying up is the next challenge. (c) Pauline Lacoste.

Godignon’s playing career as a flanker with Brive was severely limited by serious injuries including a broken tibia and torn cruciate ligaments. He dropped down the divisions to play Fédérale rugby with Malemort and then Gourdon XV Bouriane, before retiring and turning his hand to coaching. After learning the ropes with Malemort, Tulle and Gourdon, he returned to Brive to take charge of the Crabos side (under 19s).

Godignon’s potential as a coach was evident as he led the team to a national title in 2011. That success saw him promoted to the position of defence coach with Brive’s first team, where he once again impressed with his attitude and technical proficiency. Following relegation in 2012, head coach Ugo Mola quit the club and Brive decided to promote from within. The board gave Godignon two seasons to return to the Top 14, but he needed only one. A promising coach.

The marquee signing is wing Alfie Mafi, capped at U19 level by Australia. The 25-year-old made an explosive start to this year’s Super Rugby, with five tries in nine games for the Force, before being released amid accusations of ill discipline. Mafi adds finishing ability to a side which has struggled for tries in recent years. Another signing from Super Rugby is Kevin Buys of the Kings. The 27-year-old tighthead prop previously had a two-year stint with Brive between ’07 and ’09. Buys offers Brive 120kg of scrummaging power.

A controversial addition is that of Sisa Koyamaibole, the ex-Sale Sharks No. 8. At Bordeaux last season, the Fijian received a 12-week ban for biting, but a refusal to even travel to his own disciplinary hearing saw UBB wash their hands of him. The 33-year-old subsequently pitched up at Fédérale 3 side Libourne with the intention of staying fit. Koyamaibole can be devastating with ball in hand, but his discipline is equally as destructive.

The biggest loss for Brive this summer is Julien Caminati, a goal-kicking, try-scoring wing/fullback, who has moved to Grenoble. Hoping to fill the gap is Gaétan Germain, who joins on loan from Racing Metro. The 22-year-old fullback/wing is a powerful presence at 6ft 3ins and 97kg, and a reliable kicker. Back row Poutasi Luafutu (joining Bordeaux) and loosehead Davit Khinchagishili (Racing Metro) are further losses from last season,. The rest of Brive’s recruitment is made up of excellent Pro D2 players like Karien Asieshvili (loosehead) and Simon Pinet (lock) from Aurillac.

Mike Blair and Jamie Noon are two of the more familiar names in the list of 15 players who have left Brive this summer. Blair has joined Newcastle, with Noon retiring. Amongst the 13 arrivals, Kieran Murphy should be known to Pro12 fans.

Germain’s ability to replace Caminati will be crucial to Brive’s season. Caminati was particularly irrepressible during the play-offs, scoring 37 points in the two games. Outhalf Romain Sola made one Top 14 appearance for Toulouse as a youngster before spending the rest of his career in the Pro D2. His success in adapting to the top tier of French rugby will be important. Outside him, South African centre Riaan Swanepoel’s experience with the Sharks and Clermont will be helpful.

In the back row, Waqaniburotu will be the one tasked with replacing Luafutu’s powerful running game. At lock, Arnaud Mela is 33, but has buckets of Top 14 experience as well as four French caps (including one against Ireland). Last season’s top try-scorer was winger Guillaume Namy, with eight in 20 games. The 24-year-old scored two Top 14 tries during Brive’s last spell at the top table. He will need to be at his most prolific to help les Brivistes avoid relegation.

Kieran Murphy is a player who has faced Irish teams on at least eight occasions for the Scarlets. The 25-year-old has been a solid presence at No. 8 over the last two seasons, having joined the professional game at a relatively late stage. His no-nonsense, intelligent play will go down well in France, and he appears the type of player who will integrate into the group with ease. Brive will need every ounce of team spirit to come to the fore if they are to stay up. Their previous history in the Top 14 is an advantage, but it’s still a huge challenge to avoid relegation.