(Video highlights at bottom of piece)

David Kearney, pictured playing for Leinster, was the stand-out Irish player as the Wolfhounds outscored the Saxons 3 tries to 2, but still lost. (c) Martin Dobey.

In a match that failed to truly ignite, the strength of the Saxons set-piece proved crucial to their win. There were intermittent glimpses of quality from the Wolfhounds backline but they understandably failed to click. Indeed, as could be expected after only a week together, both sides lacked cohesion in a largely scrappy affair. The watching Declan Kidney won’t have any fresh selection headaches ahead of the Six Nations based on this game. Still, it was a worthwhile exercise with many players getting their first taste of senior international rugby.

The Saxons enjoyed a dominant opening ten minutes to establish a 10-0 lead. Outhalf Freddie Burns opened the scoring with a penalty after Ugo Monye’s intelligent defensive work at the breakdown. A patient Saxons maul then laid the platform for scrumhalf Ben Spencer to snipe over from a metre out.

The Wolfhounds will be aggrieved with the manner in which the try was conceded as George Robson blocked Isaac Boss at the fringe of the ruck. There were clear echoes of Nathan Hines’ involvement in Clermont’s try against Ulster last weekend. Referee Mathieu Raynal somehow missed the block and Burns added the conversion.

The Wolfhounds should have got themselves on the scoreboard four minutes later as Ian Keatley glided through the Saxons defence and released Simon Zebo down the left wing. But as is his wont, the Munster wing ignored the three supporting runners inside and backed himself. This time, the decision was wrong as Matt Banahan battered the 21-year-old into touch. A real chance wasted.

Strong carries from Chris Henry, Nevin Spence and Rhys Ruddock put the Wolfhounds back in position to close the deficit. Following the big men’s contributions, Keatley’s pass sent Eoin O’Malley on a wide line with the Saxons defence stretched. The Leinster centre straightened off his left foot and slipped a pass inside to the trailing David Kearney. Kearney had enough pace to glide through Andy Saull’s tackle and touch down. Keatley was off target with the straightforward conversion.

That was the last scoring action of the first-half as neither side managed to gain control of the game. However, the Saxons scrum did completely dominate, as it would continue to do after the interval. Just before the break, a scrum penalty gave Burns the chance to extend the lead but he dragged his 35m effort wide to the left. 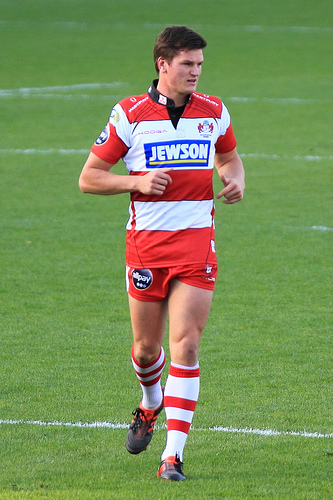 Saxons No.8 Thomas Waldrom was the beneficiary of a lucky bounce as the English side scored their second try on the 54 minute mark. After another strong Saxons scrum 5m from the Wolfhounds’ line, Burns attempted a grubber, intended for the in-goal area. But when the ball bounced up off Spence’s feet, Waldrom was in the right place to gather and stride over untouched. Burns tacked on the easy conversion for a 17-5 lead.

A positive response from the Wolfhounds ended with replacement scrumhalf Tomas O’Leary getting over for a try. Another powerful Ruddock carry from the base of a scrum was followed by Dan Tuohy and Stephen Archer getting their hands on the ball. O’Leary sniped from the resulting ruck and had the power to take Paul Doran-Jones’ tackle and stretch out for the score. Substitute outhalf Ian Madigan converted.

The Irish side couldn’t build on that score as the Saxons scrum continued to dominate. Burns again failed to reward that dominance as he missed with a poor penalty effort. He made amends soon after when the Wolfhounds were caught offside. With the Irish side attempting to play out of their own 22, the Gloucester outhalf wrapped the game up with another straightforward three-pointer after aggressive work at the breakdown from the English forwards.

The Wolfhounds managed a consolation score with the last action of the match. Ruddock’s strength in contact again set the platform. O’Leary hit Zebo, one-on-one with Matt Mullan. The wing used his pace to get outside the Worcester prop and dive over. As the Saxons second-row George Robson was named Man of the Match, Madigan was wide with his conversion effort.

The performances of Leinster tyros Rhys Ruddock and David Kearney were hugely promising. The No.8 carried strongly throughout while Kearney’s threat on the ball was complemented by his defensive awareness. O’Malley showed flashes of his attacking ability and defended strongly. Ulster’s Dan Tuohy also offered several examples of his mixture of brawn and skills while Mike McCarthy was reliable in the lineout.

No.8 Ruddock put in a muscular performance. (c) Art Widak.

Stephen Archer and Brett Wilkinson will have learned plenty from their losing battle with the Saxons front-row. Archer is still only 23, very young in propping terms. Days like today are all part of the steep learning curve for novice props. Gavin Duffy at fullback had a day to forget, looking jittery whenever the ball came near him.

Overall, Declan Kidney may be slightly disappointed that no one made themselves impossible to ignore ahead of the clash with Wales next weekend. There will almost certainly be no surprises in the selection for that game, certainly not on the basis of what was offered in Exeter today. From this point, all the focus is on 3 o’clock next Sunday afternoon, when Ireland begin their Six Nations campaign looking for revenge.