Zebo recovered from an ankle injury in time to play. He impressed on the ball. Photo via M+MD

Munster know how to win rugby matches. For the third time in three matches in the Heineken Cup, Munster did just enough to come away with a win. They have won those three matches by a combined margin of eight points. That is not to suggest for a second that Munster haven’t earned these three wins. Tony McGahan’s men take their chances when it counts and their superior experience once again told as they limited the Scarlets’ threat at Parc y Scarlets.

The Scarlets signalled that threat within the first 10 minutes of this match. Rhys Priestland was off target with his first penalty effort after only 3 minutes of play. But the Scarlets were still first onto the scoreboard after a poor pass from Will Chambers resulted in a Simon Zebo knock-on. Jonathan Davies hacked the spilled ball ahead and blindside Aaron Shingler gathered to touch down for the Welsh side. Priestland inexcusably hit the post with the conversion.

That meant five kickable points already left behind by the Wales outhalf. He was finally on target minutes later with a penalty just to the left of the posts to put his side into a promising-looking 8-0 lead. Munster came close to a quick response when Ronan O’Gara tried a cheeky cross-field kick to Denis Hurley from a penalty inside the Scarlets’ 22. The Welsh side scrambled and kicked out from their try line. Conor Murray countered and slipped Lifemi Mafi away down the left-hand touchline. BJ Botha and Wian du Preez made yards but then Paul O’Connell went off his feet as he rucked over Ronan and the opportunity was gone.

The Scarlets looked threatening at times as the half wore on. Scrumhalf Gareth Davies sniped cleverly around the fringes to break through the Munster defence at one stage, but Scott Williams knocked-on the recycled ball. Then Wales centre Jonathan Davies looked  to have released Liam Williams outside Simon Zebo but referee Romain Poite called play back for a forward pass.

Munster’s threat came mainly from the intelligent play of O’Gara and the pace of Zebo. O’Gara spotted scrumhalf Davies up in the Scarlets defensive line and put a chip into space for Zebo to gather. Liam Williams did well to stop the Munster winger before O’Gara put a second smart kick over the Scarlets, forcing Priestland to carry over his own try line.

From the subsequent scrum, Botha and the Munster pack put the squeeze on to win a penalty which O’Gara duly knocked over. Munster then came up with a brilliant passage of play to level the score. Hurley and O’Gara decided to counter from a Davies clearance. Hurley made a gorgeous one-handed offload out of the tackle to Johne Murphy, who drew Sean Lamont and sent Niall Ronan racing down the touchline. The ex-Leinster flanker stepped inside the despairing covering tackle of Davies to score in the corner. O’Gara’s conversion was wide to the right.

The game was opening up now and Zebo made a break directly from the restart. Coughlan then rose to claim an O’Gara garryowen inside the Scarlets half. The Scarlets were guilty of obstruction as Munster built a promising attack and O’Gara was on target with the penalty to leave McGahan’s team with an 11-8 lead at half-time.

The Scarlets came out of the blocks strongly in the second-half and appeared to be targeting O’Gara when they had the ball. Three times in quick succession, the Ireland legend was run over by Scarlets ball-carriers. Priestland leveled matters with a penalty from in front of the posts after Varley failed to release the tackled player.

Munster responded well to the Scarlets score again with a penalty of their own. Mafi, replacement Denis Leamy and du Preez all made yards before Scarlets captain Matthew Rees was lucky to escape a yellow for slowing the ball down. O’Gara made no mistake from under the uprights to put Munster back in front.

Priestland left more kickable points behind when he missed with a penalty effort out to the left of the posts. It was a poor kicking display from the World Cup star as he missed a total of eight points that would have made all the difference for the Scarlets.

O’Gara showed Priestland how it’s done with another penalty after the Munster scrum forced Scarlets tighthead Rhys Thomas into popping up. O’Gara’s penalty put Munster into a 17-11 lead with just under a quarter of the match remaining. The Scarlets continued their efforts to create something out wide but it often felt forced with the Munster defence in good shape.

Lifemi Mafi was pinged for side entry into a ruck and the experienced Welsh flyhalf Stephen Jones, on for Daniel Newton, reduced Munster’s lead with a penalty. The Scarlets were now back to 17-14 and with Priestland moved to fullback after the introduction of Jones, he started to threaten Munster with his pace. 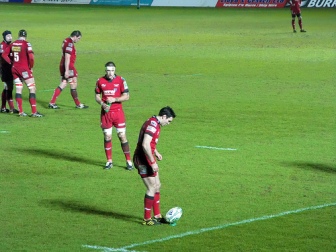 Jones came on to kick a penalty for the Scarlets. Photo via Thedogsmother

With a sustained period of pressure inside the Munster 22, the Scarlets searched for a winning score. But the Irish province’s defence was superb and disciplined. Jones was the one to knock-on as Munster hit with ferocity. At the resulting scrum, the Munster pack produced a huge shunt to win a relieving penalty.

Tomas O’Leary came on and made two intelligent kicks to pin the Scarlets deep in their own half with time running out. The Welsh bravely tried to run out of their own 22 but knock-ons from Damien Welch and Priestland scuppered any chance of late glory.

This win leaves Munster on top of Pool 1. Crucially, two of their three wins have come away from home. While Munster may not be playing spectacular rugby, they are doing simple things well to win matches. Here, they retained ball well through tight phases, took their try-scoring chance well and O’Gara kicked four from five efforts. The relentless defensive effort limited the much-hyped Scarlets backline. Munster welcome the Scarlets to Thomond Park next weekend as they look to move closer to securing a quarter-final place. This pool is far from decided but Munster are well-postitioned and improving every week.