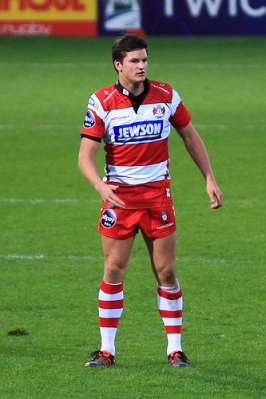 Muldoon won another turnover penalty as Gloucester ran the clock down. O’Connor produced a long touch-finder up to the half-way line. With the clock ticking past the 80 minute mark, could Connacht come up with the last-gasp try that would end their torrid losing-streak? As Flavin set himself to throw, the rain suddenly started to fall, heavily. The black clouds had rolled in over the Sportsground as Freddie Burns put Gloucester 14-10 up with eight minutes left. Now, they burst all over Connacht as they tried in vain to pierce the Cherry and Whites’ defence. This nine match losing-streak is a black cloud over Connacht rugby at the moment and is threatening to break their season.

Connacht made a promising start as they looked for their first ever Heineken Cup win. An early turnover by Ethienne Reynecke led to Mark McCrea’s kick up the right being collected by Frank Murphy. With an overlap out to the left, Connacht butchered the opportunity when Niall O’Connor and a forward runner collided. Soon after, Dave McSharry bounced off Burns’ tackle and Connacht threatened out wide, but Kyle Tonetti’s offload to Gavin Duffy was knocked-on. Still, it was an encouraging start from Eric Elwood’s charges.

Burns was on target with his first penalty effort, from 45 metres out after Connacht were caught offside. The former England U20 outhalf had a strong wind behind him and easily cleared the posts. O’Connor had a chance to respond for Connacht when Dario Chistolini dropped his bind at a scrum. However, the Irish Wolfhounds international connected poorly with his strike and pushed the kickable penalty wide.

Burns’ next effort was from inside his own half and despite having the distance again, he was narrowly wide with the penalty. He made amends for that miss when Connacht were pinged for slowing the ball down after Burns had burst into their 22. Five minutes later, Burns had another chance from long distance after Ray Ofisa was pinged for hands in the ruck. The Gloucester outhalf hit the post to let Connacht off the hook as their penalty count continued to rise.

A lack of accuracy affected Connacht all afternoon and that was summed up in one passage of play on the 25 minute mark. Jim Hamilton gave away a penalty for a shove on Mike McCarthy and O’Connor opted to go for the corner. However, the outhalf’s kick failed to find the safety of touch and Olly Morgan kicked out of his 22. At the ensuing lineout, Connacht knocked on under no pressure, allowing Gloucester to come back downfield, eventually coming away with a try.

Captain Luke Narraway, Charlie Sharples and James Simpson-Daniel all made ground for the Cherry and Whites before scrumhalf Rory Lawson switched play back to the blindside and Samoan centre Eliota Fuimaono-Sapolu offloaded intelligently in the tackle for Simpson-Daniel to finish from just a metre out on the left-hand touchline. Burns pulled his conversion to the left of the posts to leave the score 11-0 in the away team’s favour.

Connacht bounced back within minutes as O’Connor launched a huge garryowen. Lawson’s attempted catch went loose and captain Duffy was on to the bouncing ball in a flash. He stepped the tackle of fullback Morgan to dive over just to the left of the uprights. O’Connor added the simple conversion and Connacht were back to 11-7.

That score gave Connacht a visible lift as Muldoon broke from the restart and then McSharry made big yards with a bustling carry. McCrea then measured a beautiful kick into touch inside Gloucester’s 22 and suddenly it was Connacht taking the game to the visitors. McCarthy pinched Scott Lawson’s throw to the lineout and Connacht shifted the ball wide. The move broke down as McSharry knocked on but at least Connacht were showing the ability to threaten the Gloucester defence.

The half almost finished with a second Gloucester try as Henry Trinder dinked a kick over the Connacht defence. Sharples got to the bouncing ball behind Connacht’s try line, but the TMO ruled that he had touched the ball down on the dead ball line. Connacht went in at the break trailing by four points but with a strong wind behind them in the second half they could expect to put pressure on Gloucester.

The Gloucester pack, pictured in action against Toulouse, got on top in the second-half. Photo via Pierre-Selim

A positive start by Connacht after half-time led to O’Connor reducing the deficit with a penalty on the 22, slightly to the right of the posts. But the western province failed to build on that score as Gloucester got firmly on top in a low-scoring second-half. Gloucester enjoyed a period of sustained territory as they repeatedly went to their maul in an effort to grind down the Connacht resistance. With John Muldoon to the fore, Connacht repelled the Gloucester efforts but each time they got themselves into good positions, their lack of accuracy in basic skills let them down.

First, neat interplay between Tonetti and replacement Fetu’u Vainikolo was spoiled by a spilled ball. Then a Vainikolo knock-on from a Gloucester clearance allowed the Aviva Premiership side back into the Connacht half. Muldoon won a fantastic turnover to end that Gloucester attack and O’Connor gave Connacht good field position. Substitute hooker Adrian Flavin hit his man from the lineout and the Connacht maul went forward. But Eoin McKeon took the ball on and was turned over as he became isolated. Once again, a promising position wasted for Connacht.

When referee Neil Paterson caught Connacht offside under their own posts, Burns gave Gloucester a four-point lead with his third successful penalty. With the score out to 14-10, it meant Connacht would have to come up with a try to avoid their ninth defeat in a row. Muldoon’s turnover gave them one last chance but in truth it never looked likely.

Connacht now have to travel to Gloucester for the return leg of this double-header next weekend. They simply have to cut down on the amount of errors they are making, both individual and collective, if they are to end this awful streak before it comes to double figures. Unsuccessful lineouts, knock-ons, missed kicks and lack of composure in promising positions are killing Connacht. Apart from the 36-10 loss to Toulouse, Connacht are not losing these matches by big margins. If they can cut out even some of the errors then these margins will start to turn in their favour. That didn’t happen here and Connacht missed out on a good chance to finally record a win.